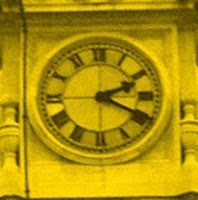 (1)
We were waiting for the time to reach five o’clock. Actually we were waiting for the General. We Came and went, checking the stag and decorations, It’s true that the stage is slightly humble, and will nearly fit the General and his companions, but what can we do more than this, here in our village we don’t have any experience in preparing celebrations, and despite this, the organizers notified each other to any mistake, what ever small, and to tell the truth, the General is meticulous in these things, notices anything, doesn’t allow any indiscipline, that’s what the tough military life taught him, things must be precise, in a way like the clock, and on mentioning the clock, it has passed two in the afternoon, and then look to that flag, the wind has twisted it, someone must climb and spread it, a waving flag makes one proud, that’s why flags had been raised in the beginning..! Did you finish typing the petition…? The General is in hurry, are the scouts, sports, and folklore groups ready…?He doesn’t want the celebration to last more than an hour…What’s the time…? Three…? Did you finish typing the paper…? Is everything clear in the petition…? The school, the dispensary, the well and the reservoir..!
(2)
The General’s convoy has arrived.
“How..? It’s only four o’clock..!”
“Are you sure that he said at five o’clock..?”
“Absolutely.”
“This is a disaster…The groups didn’t arrive, even the cavalry, the General dies for horses.”
“What can we do?!”
“There’s must be a mistake.”
“But the petition is ready.”
“Did you type the reservoir..?”
“What reservoir..!”
The voices were lost amidst the cheering, applause and shrill.
(3)
The General got off his car, wearing a shining white suite, if the General got out of, it would stand alone…! His chest decorated with colourful medals, a capon his head, a military sceptre under his arm, shining black shoes, in short everything in him shined, it even tempts one to touch it..!If you wanted to sum up this moment in one line, it will be “the shining and attractiveness”.
The dignitaries of our village surrounded him. He headed for the stage, while waving to the masses, touching their hands. He leaned on a little girl and kissed her, kissed the head of one of the elderly, then sat on the chair. He began to look around him,and gazing to his watch, and then pointed to one of his bodyguards to come closer, the General whispered something in his ear.
Did he notice that there were few people? Or did he notice the absence of the groups? May be he asks about the absence of the cavalry?
The bodyguard came down from the stage, cutting all doubts:
“The celebration should start now.”
“Now…!”
“Immediately.”
The mayor hesitated:
“We are not ready yet,there’s still a whole hour,and the time now is four o’clock.”
The bodyguard looked at his watch, shook his head, and went back quickly to the stage, he Leaned on the General’s ear, who was gazing to his watch. The General tightened his lips, and opened his palms in astonishment.
(4)
“There is no other way” said the bodyguard “the General’s time is five.”
We looked to each other in bewilderment. Nobody dared to say that the General’s watch is one hour ahead, our lost eyes kept wandering around,at that moment, the General looked towards us, actually he was looking to his bodyguard, who was standing among us, then the General tapped repeatedly with his index finger on his watch, So the bodyguard asked the mayor to tell the General about the situation.
“Whatever.” Said the mayor, he swallowed his saliva, whatever, what are you going to lose?! Tell him, why not?! He forwarded a foot and backed another, or to be precise forwarded a neck and backed another, took a deep breath and headed to the stage, and when he wanted to climb, he tripped on the steps.  At that moment, one is perplexed to name it, was it a divine inspiration? Was it a godly moment? Or may be satanic? Our mayor adjusted the time to the General’s watch.
______
* Ahmed Yousef Aqila (1958-      ) is a renowned Libyan short storyteller, has several published short story collections and also published several books on Libyan folk tales and poetry.
« مشاهد فوضوية من تحت الارض » صفحة من مذكراتي: لا أجد متسعاً لحزن جديد