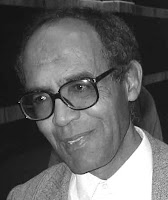 It is often said that true inspiring poetry transcends time and place, and outlives its creator, and this can be truly said about the epic works of the late Libyan poet Mohamed Shaltami.

His defiant poetry of resistance, confronting oppression and calling for freedom was ever inspiring to many generations of Libyans throughout the years.
In his poem (The Accusation) possibly written in political prison in the early 1970’s, Shaltami defies time and describes in vividness the fate of the dictator, and oppressor.
It is a testament that despite all the dictators weapons of mass oppression, the people will rise to win their freedom and the words of the poet will outlive the tyrant.
You issued your verdict,
Thus, the morning will dawn after the night
And despite your vile informant, our great mother the sun rises in glowing red
And let me shout that our great world moves in time
Without your command
The door slams,
And I can feel the morning arriving
As a fist breaking in the night
The walls of despair, as if the laughter of the ages
Threatens to wail
I see your sceptre is your crucifix, and your ending is your beginning
And I see you reaping, in the fields of death, what your hands sowed
There you are now, like me, waiting in horror for the cross
Waking up on the delusion that a force is preparing your annihilation
And your fortress is tumbling and crowding with followers… ending at dawn
With a bullet blowing up your savage head
Forever seeing in the mirror the sombre face of your killer
There you are now, like me, in horror waiting for the cross
Repeating yourself, whenever night falls, the echoes of your broken record
You are a traitor,
O, perhaps the worst thing is treason!
_________________________________
* Mohamed Shaltami (1945- 2010) Benghazi-Libya: A renowned Libyan poet, his early works of poetry was published in 1960’s and became very popular among university students and political activists in Libya. He was imprisoned for his opinions and political activism during the late years of the monarchy era and again in the early years of the Libyan revolution. He has six collections of poetry.
« ديناصورات في زمن الربيع العربي » Hidden Libyan Art: Mohammed Bin Lamin