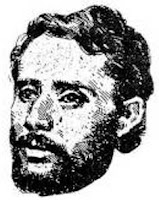 The late Libyan poet Jelani Trebshan (1944 – 2001), embodied in his works the suffering of many Libyan writers and intellectuals under the Gaddafi regime, he was considered in the early 1970’s one of the most distinguished new voices of a new generation of Libyan poets, but as the Libyan regime persecuted and imprisoned many writers in the late 1970’s, he found himself living as bohemian homeless writer on the streets of Britain and Ireland, Morocco, and Iraq,  running away from the shadows of death and longing for his homeland, until he came back to Libya in 1988 full of frustrations and wishes.
In this poem (Afflictions) he tries to come to terms with a Libya that he couldn’t recognize, a Libya that became rife with ‘snakes’ on the streets, full of sadness and despair, his frustrations and hopes for a new Libya became the main theme of his works until his sudden death in 2001.
It has been ten years since we lost Jelani Trebshan, and as a tribute to him and to the Libya that he longed for as it is embracing freedom, I present this English translation of this poem, and will be working on more translations of the best of his poems.
__________________________
What did you come to do, in a country where you don’t know anyone?
It is time for you to rest.
What did you come to do?
The circles are not as they should be
And the streets are rife with snakes
And the girls call for duty in the morning at the barracks
And the tribes are preparing to dance at the festival of the new regime.
You are sitting this hour at a hotel,
Facing the Mediterranean
That doesn’t have any hotel pleasures except the noise!!
Before twenty years
The trees at the foothills recognised you
A little child
Chasing flocks of pigeons
Building sand castles and a homeland
Dreaming to share its duties
And now here you are on a mountain, that doesn’t have anything from the Atlas except the rocks.
Waiting for poetry,
Creating a ritual of illusion,
Searching in the memories of long nights
Was I really that giant gushing with wishes?
Oh poetry, I ask you now
How can small wishes fade away?
Did the flower of the heart wither?
Oh poetry:
If only, you came back before this silence,
When the shirt was colourful.
1993
« إمتدادات القبلاوي.. قبس من ذاكرة الطفولة الستينّية (القسم الأوّل) » ذات لقاء مرتقب (جمعة بوكليب)