Libya and the international moral question 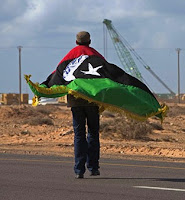 Five weeks ago many Libyans, knew that if the ‘The Arab Spring’ revolution reached its cities and towns, the response of the Libyan regime won’t be peaceful, they anticipated ferocious crack down, but no one predicted the horrors we witnessed when the Gaddafi regime unleashed its brutal forces to kill peaceful demonstrators on the streets of Libyan cities from east to west.
Libya has a long history of suffering, and strife, and in the darkest hours of despair during its past, Libyans felt always that they are like orphans, being abandoned by all, and left to suffer in silence. Half the population were either killed or forced to flee the country during four decades of Italian colonialism, and the horrors of those years are still present in Libya’s popular culture.
Libya didn’t come into existence as a nation until after 1943 when the allied forces of WWII occupied the country, and with the help of many nations and the newly formed United Nations, declared its independence in 1951.
It was through the help of the international community that Libya was liberated from the horrors of Italian colonialism, and as the Libyan representative to the UN said few weeks ago on the floor of the security council ‘Libya was established through a United Nations resolution, now once again it needs the United Nations help’.
Libyans will always recall the horrors of 41 years of the Gaddafi regime, scenes of public hangings, executions and mass murders in broad daylight and with full impunity, combined with years of oppression and mistreatment on all levels.
Libyans wanted a peaceful civil uprising, emulating the hopes and aspirations of the Libyan people, but they were confronted with unimaginable brutality, the protesters had to raise arms to defend their freedom and to end this murderous regime.
Many Libyans I know believe that the international community is morally obliged to stand by the Libyan people and don’t let them down at these historic moments. The Gaddafi regime ruled for more than four decades not through sheer coincidence, or political mandate from the people, but through imposing fear, terror and the help of many countries that made his regime legitimate through making lucrative oil and gas deals, which Libyans didn’t enjoy any of their benefits .
The stakes are high for the Libyan people, as well as for the countries in the region, a peaceful, free and democratic Libya in a region that is changing dramatically every day, will play a pivotal role in maintaining a stable more peaceful Middle East and Africa, a region that suffered the most, after the Libyan people, from Gaddafi’s terrorist adventures.
After the United Nations security council approved a No-Fly zone over Libya, thousands of Libyans, took to the streets to voice their relief that the international community is not going to let them down, and will for a moment in many decades rise once more against tyranny and oppression and allow Libyans to achieve their dream to be humans living with dignity and freedom.
« Voice of Freedom » إرحـــــــل