A horse on the coin 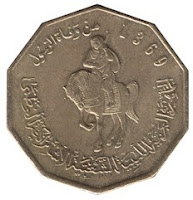 It was when a truck roared passed me on the road, that I realised where I was, it shook the place and drove away leaving a silent desolate road behind.

I realised that I was always like this; anticipating the past and future, driving in a small old car, on a road I didn’t recognise, bewildered in front of the soldiers at the check points, astonished by the vastness of the horizon.

I stopped the car after sunset on a high place off the road, tired from the scene of a barren featureless desert all day long.

I slept deeply for a long time, but the night was only beginning. The car was facing the road vertically. I turned the key and drove slowly towards the road. I stopped suddenly and asked myself, where am I heading?!

The steering wheel in my hands was ready for my command; if I headed left I might return from where I came from, and to the right the same possibility!!

I switched off the engine and got out of the car and looked around me, there was a cold dense darkness everywhere.

When I declared my destination at the first check point, the soldier stared at me for a moment, and moved two steps away to inspect the car, then waved his hand sarcastically and said “you have a long journey”. I saw his reflection on rear-view mirror, shrinking while I drove away.

At the second check point, a soldier, who looked like a desert fox, searched the car and checked my papers, and inspected me with an experienced eye, and when he became tired, he allowed me to pass while muttering “You are a stranger.”

At the third check point there was an old soldier smoking in the wall’s shade. I drove slowly closer; he waved with his hand, which had a snake tattoo, encouraging me to continue driving on my way.

Under the car dome light I took a coin out of my pocket: one side with a number and the other a horse mounted by a rider.

I mounted the horse, and the steering wheel turned to the left, and I’m driving a worn-out car with broken gauge which didn’t indicate the fuel’s level.

The road seemed straight under the head lights, and the darkness was deep. I couldn’t know whether I was leaving or going back!

I remembered the city I left behind, and breathed deeply, feeling liberated from its damp stickiness. A dampness of a crack infested with syphilis. I was leaving, shaking layers of the cities filth.

I handed over my resignation in the statistics department at the local council, where I converted the dead and the newly born into numbers and ratios, while staring at the city from my office window, noticing its absurdity, like an ant colony that lived on cockroach carcases.

I wrote my resignation on the day I had to record in the register that she died, and after a week I visited her grave, to assure myself that she died and that her sighs and coughs and laughs that have stayed sticking to the walls are just sheer illusions.

I realised that I was always like this, without a city, without a mother, on a night, on a desert, on a road without signs, lighter than a ghost, heavier than a nightmare.

Driving forward after I gambled on a horse.

* Salem Ojali (1961 – ): Born in Benghazi-Libya, he has published a collection of short stories and also several books for children, this story was translated from his collection Shahwat Al Skeen (Knife’s Lust) 2000.