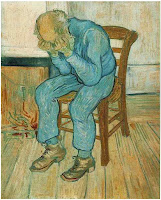 By: Mohamed Al Asfar*
They met every Sunday, Tuesday and Thursday morning in front of the bookshop, chatting about the busy life, most of them old men even time got fed up counting their age, their faces reveal the marks of senility from limpness, dryness and tremor, some of them snuffed and chewed tobacco while the others smoked cigarettes while exhaling with difficulty.
Haj Buzaid sneezed while he stared at the closed door of the bookshop and said: “The wretched is late… may be one of the bags fell on him!”
Haj Awadh blows his words through his wide toothless smile “We might find his name on the obituaries page. Just two days ago I asked him about his health, and he replied “You never marry an Egyptian and a Libyan women together, the Bazeen* and Mudamas* need an the stomach of an elephant and still it is not enough…!”
And the words of the elderly mixes between a blamer and an encourager and after their glee they asked God’s forgiveness and they mumble “after a long life Inshallah”.
At the café, opposite the bookshop, the Somali newspaper sellers sat drinking tea with milk and muttered while expecting the opening of the bookshop. The sun scattered the old cloud dunes from its disc, and finally the shopkeeper arrived, lifting the shutter door, after securing the lock on the loop in the floor, piling the bundles of newspapers inside, every old man handed his quarter pound and took his copy of (Akhbar Benghazi)*. Some couldn’t wait and opened it directly on the obituaries page, and others folded it under their arms and went out, one of them wore a coat under his Farmala*, stepped on his cigarette butt, put on his spectacles and searched for scrap sale ads.
Haj Buzaid stepped outside and stood in the sun near the door and stared to his watch and walked heavily, with the newspaper in one hand and the cane in the other and his weary sight extending to the far end of the street.
One day passed and another came and one old man was lost from the gathering and a name was added to obituary page. they asked questions and grieved till they wiped their tears with their sleeves. The days passed and two old men joined the group and three were lost and four more were added. Time passed quickly and the sleeves became wet then dried and wet once again, and the obituary list grew and withered like a day’s shadow.
The nails are hammered and the presses printed, the stamps are liked, the sparrows chirped and the waves swam and the earth becomes green and the sky rained and the waves move back and fro and the sun doesn’t let go, and life motion grinds without mercy and listens only to a smooth weep streaming from the womb in the middle of cries and shrills and showers of warm milk.
________
* Mohamed Al-Asfar (1960- ): A Libyan writer. Has several published novels and collections of short stories.
* Bazeen: A traditional Libyan dish made of cooked wheat dough in a tomato sauce.
* Mudamas: A middle eastern dish made of Fava beans.
* Akhbar Benghazi: Benghazi News, the local newspaper of Benghazi, the second largest city in Libya.
* Farmala: A traditional Libyan waistcoat or vest.
« ارواح لندنية (4) » أردي" تكشف المزيد من الجهل"