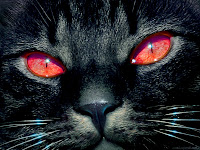 (1)
His eyes were shining in the dark, glowing like embers on the tree top, inspecting lustfully the distracted female cat.
When he felt that the moment was suitable, He jumped in the dark void. He grabbed her neck with his teeth. She sent a sharp shriek trying to escape, while his fire was raging.
(2)
The scream burst into all the houses. Exposing that frantic moment.
The woman laying beside her husband raised her head. She felt a delicious shiver while she was listening to the screaming female. She looked to her husband who gave her his back while snoring. She gave off a long sigh, and pulled the cover on her face nervously.
At that moment, a bullet echoed, killing the scream.
(3)
Laying, licking the clotted blood on his chest.
“If only that bitch didn’t scream, they wouldn’t find me. Now I’ve lost my sixth soul! This time because of a female”
He began to recall how he lost his five souls.
“This time, my vengeance will be fierce. I won’t let them ever taste comfort”
He raised his eyes. Moved slowly, climbed to the roof of the cave, and watched a lizard while licking his blood.
“There they are, time after time, finding enough courage to chase me. The age when they were closing their doors and windows and sleeping before sun set like chicken has gone. I don’t know who was that wicked soul who revealed the secret? Is it another devil? They thought that the black dog is the devil. That’s why I chose the body of a cat to be safe, and to enter every house, at any time. I had a fair number of souls. I still have the seventh soul, I must be more careful now.”
(4)
The morning fog scattered. They discovered that some of the caves have vanished. New caves appeared instead. The trees have changed their place. Some have left to the opposite mountain foot. Even the valley changed its course, sloping down from north to south. Many things have gone with the fog. An invisible hand reorganized the things!
They described those changes of being a curse brought by the black devil.
Amidst the bewilderment the news came that he was seen this morning on top of the valley.
(5)
He was enjoying the sun, and the breeze that sent life in the forest, moving silently, carelessly, stopping now and then, and raising his head, smelling the scents around him, while continuing his decent to the valley.
When he came close to the narrowest point in the bend, the rifles muzzles were blocking him from both sides. There wasn’t enough time for one jump.
After his corpse ceased to jerk, the head was severed and raised on a spear.
(6)
How many times does death seem blind and cheap?! What an unfortunate cat! Killed and mutilated, only because he looked like me, it’s good to have someone that looks exactly like you!
While he listened to cries of victory, and watched guns being raised toward the sky in celebration, he was peeking cautiously with the vigilance of someone who has only one soul.
_________
* Ahmed Yousef Aqila (1958-      ) is a renowned Libyan short storyteller, has several published short story collections and also published several books on Libyan folk tales and poetry.
« امتداد الصوت: الشاعر خالد درويش » Freedom of speech in Libya!.. A myth