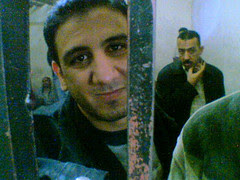 I have been following the case of the Egyptian blogger Kareem Amer, since he was arrested last November 2006. Yesterday an Egyptian court in Alexandria found him guilty on the charges of insulting both Islam and Egyptian President Hosni Mubarak and sentenced him to four years in jail over his writings on the Internet. Abdel Karim Suleiman (his real name), a 22-year-old former law student at al-Azhar, he called the institution “the university of terrorism” and accused it of suppressing free thought. The university expelled him in 2006 and pressed prosecutors to put him on trial.
He is the first blogger to stand trial in Egypt for his Internet writings. He was convicted in connection with eight articles he wrote since 2004. Rights groups and opposition bloggers in Egypt expressed their concerns that the conviction could set a legal precedent limiting Internet freedom in Egypt, and maybe other Arab countries. Kareem is not the first blogger in Egypt to be persecuted for his writings on the internet other opposition bloggers have been arrested periodically during street protests and then held for weeks or months before being released. Kareem, a Muslim and a liberal, has not denied writing the articles but said they merely represented his own views. His lawyers said they planned to appeal the verdict, and one member of the defense team described the trial as unfair. One of Kareem’s articles said that al-Azhar in Cairo, was promoting extreme ideas. Another article, headlined “The Naked Truth of Islam as I saw it”, accused Muslims of savagery during clashes between Muslims and Christians in Alexandria in 2005, and has likened Mubarak to dictatorial pharaohs who ruled ancient Egypt. While some of the public who attended the trail asked for a harsh verdict, however the judge in the trail sentenced Kareem to 4 years in prison.

I am not going to comment on Kareem’s writings or whether he insulted Islam or not, that’s not the subject here, what I am concerned about is that these regressive regimes in the Arab countries can extend their dirty hands to reach into the cyber world of blogs to prosecute who ever they dislike, politically, religiously, or socially. It is totally ironic that these regimes with all their power still feel threatened from words, and not any words, those written on the internet.