As I’ve predicted Anglo-Libyan Hisham Matar’s debut novel (In the Country of Men) has reached the longlist of the prestigious Man Booker prize for fictional literature.
On Monday the Chair of this year’s judges panel, Hermione Lee, announced the Longlist that included 19 books, which have been chosen out of 112 entries for this year by the publishing houses in Britain, among the longlisted names are, David Mitchell, Peter Carey who won the prize twice before, Sarah Waters, Naeem Murr, Nobel prize laureate Nadine Gordimer, and others.
The Man Booker prize is one of the most prestigious literary awards in English literature, the winner of the Prize receives £50,000, which is not important in comparison to the publicity and success that comes after that. 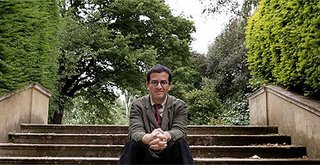 If things go well I expect that Hisham will make it to the shortlist which will be announced on 14th September, and then the big one will be on 10th October when the winner of the prize will be revealed at an awards ceremony at Guildhall, London.
We say Mabrouk to Hisham and this is only the beginning